In an article published on the news site enikos.gr (May 10, 2017), entitled “In bloody ink”, journalist and cartoonist Stathis (Stavropoulos) denounces attempts to incriminate criticism against Israel that present it as anti-Semitism in order to annul such political criticism. The article is accompanied by a cartoon which pictures free opinion killed by Israel. The article and cartoon were Stathis response to the publication of a survey on Anti-Semitism in Greece which shows high rates of anti-Semitic feelings in Greece.

In a statement, the Central Board of Jewish Communities in Greece expressed the outrage of the Greek Jewry at Stathis’ antisemitic libel:

[…] And it is obvious for us that even the sharpest criticism against the policy of the Israeli Government has nothing to do with Anti-Semitism. However, when -according to a recent research, 65% of the Greeks agree with the opinion that “Israel treats the Palestinian exactly as the Nazis treated the Jews”, then all –politicians and journalists alike- need to take responsibility for reproducing the industrialized propaganda of delegitimization of the State of Israel.

Stathis’ writing and the accompanying cartoon qualify him as a genuine representative of both traditional and new anti-Semitism. It is a pity!

Ariel Sharon dressed like a Nazi with a swastika on his arm stating “Fascism is not only the logic of killing, but primarily killing logic” appears on the cover of Stathis Stavropoulos’ collection of cartoons “The anti-fascist, anti-racist [cartoons]” (Athens 2016).

Ariel Sharon dressed like a Nazi with a swastika on his arm stating “Fascism is not only the logic of killing, but primarily killing logic” appears on the cover of Stathis Stavropoulos’ new collection of cartoons. It is entitled “The anti-fascist, anti-racist [cartoons]” (Kapsimi Editions, Athens 2016).

The cartoon was initially published in the leftwing daily newspaper Eleftherotypia in March 2004. 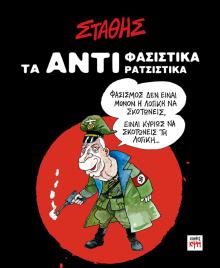 Eleftherotypia March 24, 2004: A caricature (above) by Stathis Stavropoulos shows Ariel Sharon dressed like a Nazi with a swastika on his arm stating: “Fascism is not only the logic of killing, but primarily killing logic.” Via adl.org

Cartoonist Stathis Stavropoulos, who repeatedly compared Israel to Nazism, has been signed up by Panagiotis Lafazanis in the run to the snap election on September 20.

Panagiotis Lafazanis, former Energy Minister of Greece and Syriza’s co-founder, broke away from his party together with 24 other MPs to found the new anti-bailout and hard-left Popular Unity Party (Laiki Enotita). The recent opinion polls published in Greece suggest PU would capture only 2.5-4 per cent of the vote in the snap election on September 20.

Lafazanis has a deep admiration for Russian President Vladimir Putin and has worked hard to deepen the relations between Greece and Russia in the energy sector. He dismisses the Eurozone as a “dogmatic architecture” with no future that has been “constructed for the ‘lobby’ of the North” (quotes from its recent op-ed article translated by The Greek Analyst). In the same op-ed, Lafazanis insists on the necessity of Greece’s discharge “from the shackles of servitude and dependence, and the implementation of a new, genuine, independent, and multidimensional foreign and economic policy”. Lafazanis’ enemy is not only the “Germanized Europe”, but also the U.S. and Israel which are accused of controlling Greece. Lafazanis suggests that Greece can have potential without being “an American-Atlantic plot [of sea]” or a “satellite state of the American-Israeli Middle East axis”.

Popular Unity Party faces a life or death struggle against those “neocolonial foreign centers” too and calls on the end of the military cooperation between Greece and Israel, on the grounds that Israel “occupies foreign territories in the region”. Moreover, its leader has signed up cartoonist Stathis Stavropoulos who in the past depicted Israeli Prime Minister Ariel Sharon and President George W. Bush dressed like Nazi officers with swastikas on their uniforms, both shooting pistols. He also repeatedly portrayed Israeli soldiers as Nazis.

According to the daily newspaper Ta Nea, another ally of Panagiotis Lafazanis in the run up to the snap election is the small Christian Democracy Party, which has been founded by Nikos Psaroudakis (1917-2006), one of the main publishers of the antisemitic hoax “The Protocols of Elders of Zion” in Greece.