September 8: At least four banners featuring antisemitic signs were displayed by violent protesters against the Macedonia name deal in the northern Greek port city of Thessaloniki (h/t Leon Saltiel). They read “Talmud, Qabballah, the Enemy of the Humanity”, “Against New World Order (with a red line erasing the Star of David), “Here Greece, Here Orthodoxy. Death to Zionism” and “Rothschild, your end is coming”. 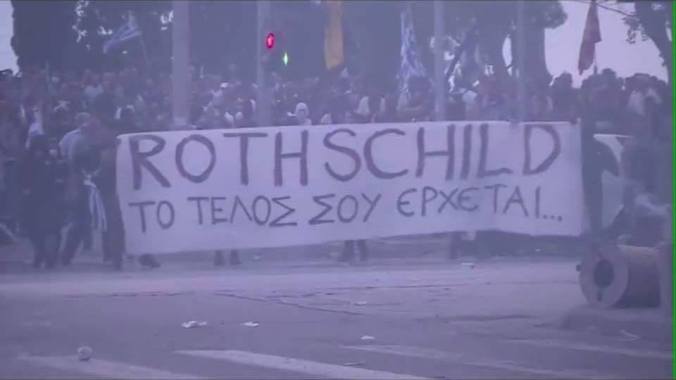 “Rothschild, your end ist coming”: One of the antisemitic banners displayed in Thessaloniki. More signs at antisemitism.org.il

Late August: Antisemitic graffiti was sprayed on the wall of a house located in a central street of Sparta. The inscription reads “Death to the Jews” (Θάνατος στους Εβραίους), skalalakonias blog has reported.

Late August: The Ioannina section of leftist “Popular Unity” party opposed in a press release the twinning agreement between the city of Ioannina (northern Greece) and the city of Kiryat Ono calling Israel a “terrorist state”.

August 30: An antisemitic sticker referring to the “Jews and money” stereotype with the slur “Jew dog” was found near the Byzantine Museum of Thessaloniki. The sticker was posted by followers of “Father Cleomenis,” a man who dresses as a monk and posts videos of himself on social media vandalizing monuments, most recently the Holocaust memorial in the Central Greece city of Larissa (h/t Racist Crime Watch).

Via Central Board of Jewish Communities in Greece

Two sketches by Michalis Kountouris, with strong messages of demonisation of Israel and unacceptable parallelism with the Holocaust, were published in the “Efimerida Syntakton” (EFSYN. – “Editors’ Journal”) on 10th and 11th April 2018. The sketches were commented on with the following article entitled “Bloody Handprints” – published in the issue of the EFSYN of 16.4.18 – by the journalist and General Secretary of the Central Board of Jewish Communities in Greece, Victor Is. Eliezer.

The sketches also stirred a reaction from Israel’s Ambassador to Greece, Ms. Irit Ben-Abba (letter to the EFSYN 11/4/2018), and journalist Dimitris Psarras (through his article “We do not Forget the Holocaust” EFSYN  16/4/2018).

Yom Hashoah. Holocaust Day, 11th April 2018. The Jews mourn for their 6,000,000 fellow Jews who were unjustly and brutally killed in the gas chambers of the Nazi camps! On the same day, in Greece, the “EFSYN”, known for its merciless struggle against anti-Semitism and neo-Nazism, hosted a sketch in which an Israeli soldier leaves the prints of his bloodied hands on the Wailing Wall, next to many other bloody handprints of other people who apparently prayed before him. You know, all the Jews have visited the Wailing Wall, many of us pray and touch the Wall that is what is left of the Temple of Solomon. The bloody handprints, according to the cartoonist, could be the bloody handprints of every Jew who has visited the Wailing Wall!  One day earlier, another sketch (by the same cartoonist) appeared in the newspaper, where the Gaza Strip was identified with a prisoner of Nazi concentration camps.

Demonstrators protesting “the imperialist attack on Syria” in Athens. Screenshot via inter.kke.gr

The Greek Communist Party (KKE) organized a rally in central Athens to protest the US-led airstrikes against Syria on Saturday. The protesters chanted anti-U.S., anti-Nato and anti-EU slogans and even set an American flag on fire right in front of the American Embassy.

The Greek Communist Party issued a statement in which it blasted the SYRIZA-ANEL coalition government for “implicating” Greece “deeper in this massacre, on the account of the Greek capital, that is claiming its participation in the distribution of the loot and of the market shares.” It also accused the Greek government of cooperating militarily “with states-killers such as Israel.”

“Despite the problems facing our people, we must not underestimate the fact that a genocide is taking place in our neighborhood. Innocent children, women, families are being killed,” Koutsoumbas said during a meeting with former Greek President Karolos Papoulias in Athens four years ago.

Back in 2014, the monument in commemoration of the old Jewish cemetery of Thessaloniki was desecrated with the same graffiti, just weeks after it was dedicated.

Appalling: Holocaust memorial in Thessaloniki, Greece desecrated with "Free Palestine" graffiti. 94% of the city's 50,000 Jews were murdered by the Nazis, virtually wiping out the Jewish community; today only about 1,000 Jews remain. pic.twitter.com/GuAtnDskfw

On the road leading into Hora, the capital of Andros, Andrea Gilbert from Greek Helsinki Monitor found in July 2016 a wall covered with graffiti. This was leftist graffiti, the red by supporters of the Laiki Enotita (Popular Unity), the breakaway farther left party that spun off SYRIZA after the referendum, one year ago. Briefly, the slogans support the past glory of the OXI (or NO) vote, purporting to shed the yoke of EU occupation. The black writing is the work of Antifa (far left ‘antifascist’ group), purporting to denounce the existence of ‘fascists’ everywhere, “even on Andros”. The Star of David is used in association with the evils of NATO, capitalism, the EU, etc… all linked to force of Zionism. 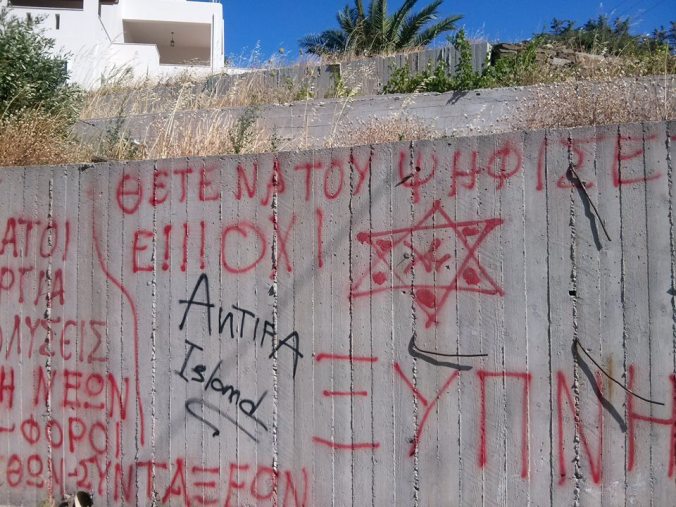 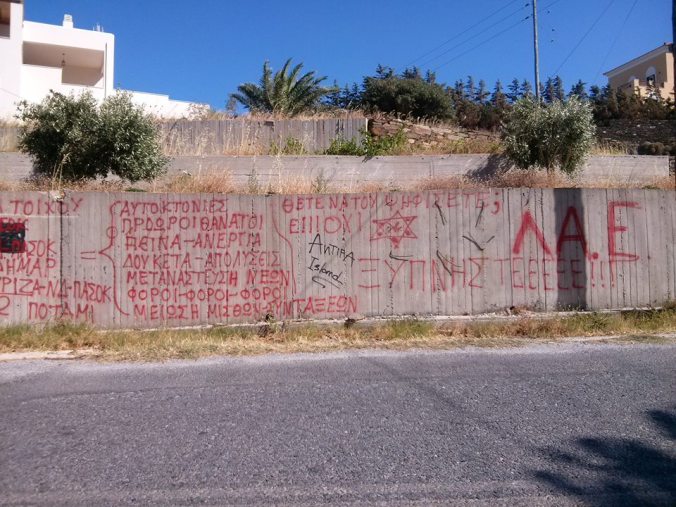 The Star of David has been painted with the slogans: “Do you want to vote for them? [the Greek pro-Memorandum parties are meant] No!!! Wake up!!!” Andros, July the 14th, 2016. Photo courtesy of Andrea Gilbert.

Andrea Gilbert commented on Facebook: “The slogans are old, but is this graffiti? The paint should have faded in the elements over the course of a year. No matter, though. The real offense here is not so much that this graffiti was done, so much as the fact that the administration of this manicured village and pristine island has allowed them to remain, for anyone entering the town to see. For even a day, much less for over a year!”

The black writing is the work of Antifa (far left ‘antifascist’ group), purporting to denounce the existence of ‘fascists’ everywhere, “even on Andros”. Photo courtesy of Andrea Gilbert.

Police early on Wednesday detained 10 suspected members of the anarchist group Rouvikonas – the Greek name for Rubicon – who barged into the departures area of Athens International Airport and started shouting slogans near the check-in desks of Israeli airline El Al.

The protesters shouted “No to the agents of Mossad” and “No tolerance to the bullying of Mossad” as travelers were waiting to check in to their flight.

Antisemitic banner displayed by members of Rouviconas near the check-in desks of Israeli airline El Al. It reads: “No tolerance to the bullying of Mossad.” Screenshot via: https://www.youtube.com/watch?v=fNUvv5PhPU4

Update: In a posting online, they claim that the security staff working for El Al are Mossad agents and that other Mossad agents are among the passengers during the El Al flights They also stigmatize Israel as the „oppressor“ in the Middle East while considering Palestinians as inherently oppressed.

Ariel Sharon dressed like a Nazi with a swastika on his arm stating “Fascism is not only the logic of killing, but primarily killing logic” appears on the cover of Stathis Stavropoulos’ new collection of cartoons. It is entitled “The anti-fascist, anti-racist [cartoons]” (Kapsimi Editions, Athens 2016).

The cartoon was initially published in the leftwing daily newspaper Eleftherotypia in March 2004.

Eleftherotypia March 24, 2004: A caricature (above) by Stathis Stavropoulos shows Ariel Sharon dressed like a Nazi with a swastika on his arm stating: “Fascism is not only the logic of killing, but primarily killing logic.” Via adl.org

Members of Left Anti-capitalist Group (Aristeri Antikapitalistiki Syspirosi) have displayed at the entrance of the Law Faculty at Democritus University (Thrace, Northern Greece) a banner which suggests that Israel is commiting genocide against Palestinians, grassrootreuter blog has reported. It reads: “Not another Holocaust. Solidarity to the Palestinians.” 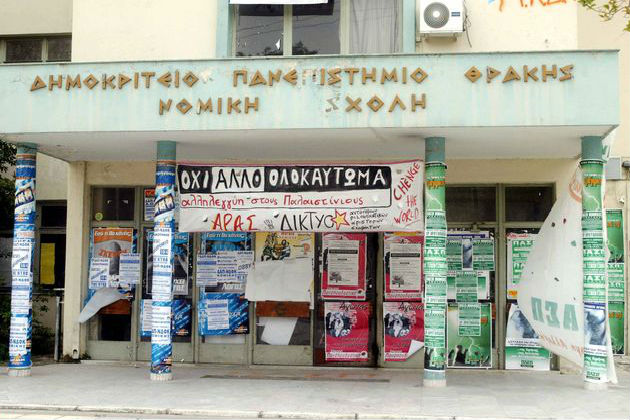 The photo featuring the antisemitic banner has been published in the leftwing daily newspaper Efimerida ton Syntakton to illustrate an article about a discrimination issue at Democritus University.

Golden Dawn MP Christos Pappas wearing a nazi fez (tn: actually this “fez” was part of the uniform of the 13th Waffen Mountain Division of the SS Handschar) and a T-Shirt calling for “Uprising For An Independant Palestine.” Via I Can’t Relax In Greece & Abravanel, the Blog

Via The Times of Israel

Greek Defense Minister Panos Kammenos called on the Justice Ministry to take action against a neo-Nazi lawmaker after he made anti-Israel comments in parliament.

Speaking during a debate in parliament on Monday, Christos Pappas, from the Golden Dawn party, called Israel an “eternal enemy of Greece and Orthodoxy,” a reference to Greece’s official church.

Kammenos has himself in the past been criticized for anti-Semitic comments, after claiming in 2014 that Greek Jews paid fewer taxes than other Greeks, but since taking up the position of defense minister has overseen increasingly warm ties with Israel.

Papadimoulis with Khaled on February 10, 2016 (Photo via http://syriza.eu/images/PAPADHMOULIS/PapadimoulisHaled.jpg). Khaled poses in scarf with the PFLP logo: Inside a red circle, a black arrow points from a white semi-circle to a map of Israel and the territories. Below the arrow, on the right side, is a green dot. The arrow symbolizes the return of Palestinian refugees. Red symbolizes the group’s Marxist-Leninist heritage. Description via http://archive.adl.org/terrorism/symbols/popular_front_pa1.html

Palestinian terrorist Leila Khaled met with Dimitris Papadimoulis, Syriza MEP and Vice-President of the European Parliament, in its headquarters in Brussels on February 10, 2016. Leila Khaled was accompanied by a PFLP delegation. Syriza, a left-wing party that despite its past support for the Palestinians has sought to strengthen ties with the Jewish state, has called Khaled in a statement issued after the meeting an “activist with a historical role in the Palestinian Resistance.”

Khaled is member of the Popular Front for the Liberation of Palestine (PFLP), a Palestinian Marxist-Leninist and nationalist organization founded in 1967. PFLP is considered as a terrorist organization by the Council of the European Union, since its members have carried out numerous hijackings, assassinations, bombings and paramilitary operations against civilian and military targets in Israel. Khaled herself has been involved twice in airline hijackings and is an active supporter of the BDS movement.

One can therefore raise the question over the legitimacy of the visit of the PFLP delegation at the EU Parliament. How can it be that the delegation of a terror group obtained the right to enter the EU Parliament and meet with its Vice-President? Does Syriza seek to compensate the ongoing cooperation between Greece and Israel with an implicit tolerance of Palestinian radicalism?

After her visit to the EU Parliament in February, Leila Khaled has launched a tour of Germany, Sweden and Austria, meeting with Palestinian communities and supporters of the Palestinian cause. In Wuppertal, Germany, she spoke in a Greek restaurant together with a speaker who has justified terror attacks against Jews in Israel. During an event in Vienna, Austria, she accused Israel of being responsible for “a Holocaust” against the Palestinians and justified the ongoing knife attacks on Israeli citizens.