Papadimoulis with Khaled on February 10, 2016 (Photo via http://syriza.eu/images/PAPADHMOULIS/PapadimoulisHaled.jpg). Khaled poses in scarf with the PFLP logo: Inside a red circle, a black arrow points from a white semi-circle to a map of Israel and the territories. Below the arrow, on the right side, is a green dot. The arrow symbolizes the return of Palestinian refugees. Red symbolizes the group’s Marxist-Leninist heritage. Description via http://archive.adl.org/terrorism/symbols/popular_front_pa1.html

Palestinian terrorist Leila Khaled met with Dimitris Papadimoulis, Syriza MEP and Vice-President of the European Parliament, in its headquarters in Brussels on February 10, 2016. Leila Khaled was accompanied by a PFLP delegation. Syriza, a left-wing party that despite its past support for the Palestinians has sought to strengthen ties with the Jewish state, has called Khaled in a statement issued after the meeting an “activist with a historical role in the Palestinian Resistance.”

Khaled is member of the Popular Front for the Liberation of Palestine (PFLP), a Palestinian Marxist-Leninist and nationalist organization founded in 1967. PFLP is considered as a terrorist organization by the Council of the European Union, since its members have carried out numerous hijackings, assassinations, bombings and paramilitary operations against civilian and military targets in Israel. Khaled herself has been involved twice in airline hijackings and is an active supporter of the BDS movement.

One can therefore raise the question over the legitimacy of the visit of the PFLP delegation at the EU Parliament. How can it be that the delegation of a terror group obtained the right to enter the EU Parliament and meet with its Vice-President? Does Syriza seek to compensate the ongoing cooperation between Greece and Israel with an implicit tolerance of Palestinian radicalism?

After her visit to the EU Parliament in February, Leila Khaled has launched a tour of Germany, Sweden and Austria, meeting with Palestinian communities and supporters of the Palestinian cause. In Wuppertal, Germany, she spoke in a Greek restaurant together with a speaker who has justified terror attacks against Jews in Israel. During an event in Vienna, Austria, she accused Israel of being responsible for “a Holocaust” against the Palestinians and justified the ongoing knife attacks on Israeli citizens.

XYZ Contagion, a Greek investigating journalism blog, reported that earlier this month three Golden Dawn MEPs produced a video with antisemitic and anti-immigrant remarks and then published it on YouTube. The video was allegedly shot in a studio of the European Parliament in Strasbourg. The three Golden Dawn MEPs are: Lampros Fountoulis, Eleftherios Synadinos and Georgios Epitideios.

Especially E. Synadinos suggested that Angela Merkel and other European “powerful leaders” obey to a plan for “global domination and uniformisation” and referred to the antisemitic forgery “The Protocols of the Elders of Zion”. He then accused these leaders of doing nothing to stop “the Americans” and “the Zionists” from executing their “plans” against the European nations. L. Fountoulis agreed with E. Synadinos and defended the necessity of Greece’s cultural integrity. He also suggested that all decisions made by the European foreign ministers are not really democratic but they are “imposed” by “the most powerful”. Finally, G. Epitideios endorsed the conspiracy theories of his colleagues.

Back in 2012, Golden Dawn MP Ilias Kasidiaris read out in Greek parliament a passage from “The Protocols”. There was absolutely no reaction to this among the members of parliament.

The following video presents the dialogue between SYRIZA (Greece) & GUE/NGL MEP Sofia Sakorafa and Gunnar Hökmark of the Moderate Party (Sweden), part of the European People’s Party, during the debate on the Recognition of Palestine statehood in the European Parliament. Sofia Sakorafa asked Gunnar Hökmark “since when occupation became a factor for peace in any region and since when the resistance to that occupation is called terrorism”. Gunnar Hökmark responded that a peaceful coexistence cannot be achieved when movements like Hamas and Hezbollah, which are not fighting for an independent and democratic state, are accepted. He added that those movements “are fighting for a society where people’s rights are humiliated” and pointed out that he wants a Palestinian state that fulfills its democratic obligations.
In a recent speech in the European Parliament, Sakorafa has suggested that “there’s an apartheid imposed” in Gaza and made a comparison between the crimes of the Nazis and “the atrocities of Israel”. 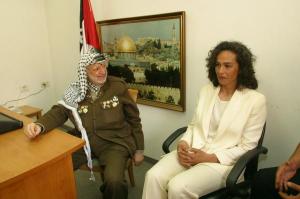 Sakorafa became a Palestinian citizen in 2004 and applied at the last minute for a berth on the Palestinian Olympic team at the age of 47. Photo via twitter.com/SofiaSakorafa/status/489878904875024384

Sofia Sakorafa, Greek Eurodeputy representing the Coalition of the Radical Left (SYRIZA), has criticized the recent European Parliament resolution on Israel-Palestine after the Gaza war and the role of the EU and said that this motion represents a “distortion of reality” on the grounds that Israel is the “conqueror” and Palestinians “the resisting”, that “there’s military cleansing by an occupation army” and that “there’s an apartheid imposed” in Gaza. Sofia Sakorafa made also a comparison between the crimes of the Nazis and “the atrocities of Israel” and argued that “the redemption of the Germans came when they looked right in the eye this black page of their history”, whereas there is need not to “allow history to cite the atrocities of Israel, with words and terms that incubate their repetition.”

Syriza fully identifies itself with the Palestinian cause, and their party platform explicitly calls for an end to Greece’s defense cooperation with the “aggressive” Israel, even though on Friday his foreign affairs advisor tried to take a softer stance. Tsipras’ party colleagues and his own inner circle have repeatedly attacked Israel and the “Zionists”, claiming that they are not anti-Semitic, just anti-Zionist. […] Sofia Sakorafa, a confidante who has rubbed shoulders with Hamas, and a celebrated former Olympic athlete, requested and received Palestinian citizenship a few years ago, in a bid to represent Palestine in the Olympic Games, when she was well into her 40s. (Sabby Mionis: Greece’s Jewish voters are faced with an impossible choice, daily “Haaretz”, Jun. 10, 2012)

NEW YORK/ATHENS (EJP, 19/09/2010)—The World Jewish Congress (WJC) has called on the president of the European Parliament to send an independent observer to watch the trial of three Greek human rights activists who spoke out against Greece’s notorious anti-Semite and extreme-right lawyer and writer Konstantinos Plevris.

Konstantinos Plevris, who has described Jews as “subhuman and questioned the Holocaust in his book “Jews: the whole truth,” was found guilty of inciting racial hatred in 2007 and sentenced to 14 months in jail, but was later acquitted in an appeal.

He is now taking legal action against a series of his critics, including the three human rights activists, representatives of the Greek Jewish community and several journalists as for libel. The public prosecutor’s office in Athens started legal action for allegedly “propagating false news which could cause unrest to citizens regarding the impartiality of the Greek judicial system”.

The trial will commence on 22 September.

The Word Jewish Congress criticized the Greek judiciary for acquitting Plevris last year and for now trying to silence those who publicly spoke out against him.

In a letter to European Parliament president, WJC Vice President and Deputy Secretary-General Maram Stern called the trial “a perversion of justice” and “an assault on fundamental European values.”

He voiced suspicion that parts of the Greek judiciary were not inclined to defend fundamental European values, but consciously acted against them.

“We must not allow that people who speak out against bigots such as Mr. Plevris are being prosecuted whilst the hate mongers themselves are being acquitted by the courts,” he said.

“We urge the European Parliament to dispatch an independent observer to this trial in order to ascertain whether the Greek courts act in agreement with the basic principles of the EU,” Stern wrote in his letter.

“These three courageous people stood up against a notorious hate monger who has repeatedly called for the annihilation of Jews and praised the Nazis. They defended the small Jewish community in Greece, and they deserve our support.”