We woke up one morning, and we saw black snow. It had snowed, and it did not usually snow in March. My grandmother said that “Something will happen, something bad will happen”.

[On the night of March 24, 1944, the Jewish population of the city was arrested and detained in the Girls’ High School of Kastoria. Three days later, 763 people, and a small number of Yugoslavian Jews who had found refuge in Kastoria were transported to Thessaloniki on vans and then to Poland, never to come back again. via] 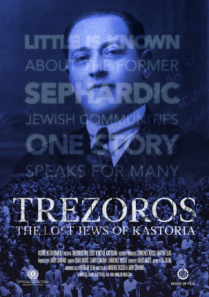 “Trezoros: The Lost Jews of Kastoria” is a moving documentary that illuminates the lives of a Sephardic community in Greece whose story speaks for all people who have been decimated by war and discrimination. The story is set in the beautiful, idyllic city of Kastoria where Jews and Christians lived in harmony for over two millennia.

In October of 1940 it would all be destroyed after the invasion of Greece by Axis forces. Initially occupied by Italy, the Jewish community remained safe. After Mussolini fell from power the Nazis took control of the town, dooming the community that had existed since the times of the Roman Empire.

The film uses never-before-seen archival footage, vibrantly bringing to life just one of the many Jewish communities that had existed in Greece before the end of World War II. TREZOROS (Ladino/Judeo-Spanish term of endearment meaning “Treasures”) is a highly emotional story told by it’s survivors, with interviews filmed on location in Kastoria, Thessaloniki, Athens, Tzur Moshe, Tel Aviv, Miami, Los Angeles and New York.

[…] For the directors Lawrence Russo and Larry Confino, who are cousins and whose forefathers were Kastoriani, this was more than a family project. Releasing precious oral history narrated by a small group of people, the superbly crafted documentary tells of the suffering of one town, but calls forth the universal quality of community resilience in the face of horrendous odds.

The directors seamlessly and without artifice combine interviews with highly personable men and women of the Sephardic community which was in the 1930s a substantial presence in Kastoria, a stronghold of the Greek Orthodox Church but where Jews and Christians lived in harmony for hundreds of years. The Jewish populace of Kastoria dating from the times of the Roman empire, were to be all but wiped out by the Holocaust.

Compared with the tragedies that hit their co-religionists in much of Europe, the fate of Greek Jews is inadequately known. This film graphically puts that right as far as Kastoria is concerned. On a larger scale, Thessaloniki had 50,000 Jews before World War II and was known as the Jerusalem of Greece. Today there are only about 600 of the faith living in Greece’s second city. [James Brewer, allaboutshipping.co.uk]