The Greek Jewish Synagogue and Museum of New York 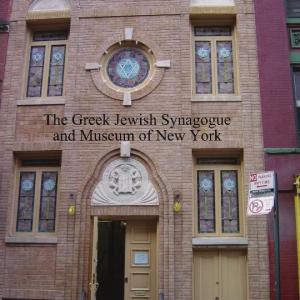 Located below Manhattan’s skyscrapers, just around the block from today’s Chinatown on the historic Lower East Side of New York City lies a hidden treasure few know about…

A 2,000-year-old culture virtually unknown, even to its neighbors. A tiny group. A minority within a minority. They are called Romaniotes. An obscure branch of Judaism, which few Jews have ever heard of, with traditions dating back to Roman times.

The founders of this community are the descendants of Jews who, after the destruction of the Second Temple in 70 A.D., were sent on a slave ship to Rome. Instead, a storm forced them to land in Greece, where over the next 2,000 years, they developed uniquely different ethnic and religious customs adopting many local customs while maintaining their religious identity.

Today, all these years later, you can visit the only synagogue in the Western Hemisphere of this, obscure Jewish community. The Kehila Kedosha Janina Synagogue and Museum. Still operating in its original form since 1927.

The synagogue is open for Saturday services at 9:00 a.m. and on holidays.

-founded in 1927 by Greek Speaking Jews

-The Brotherhood of Janina established in 1907

‘’The Cookbook of the Jews of Greece” by Nicholas Stravoulakis